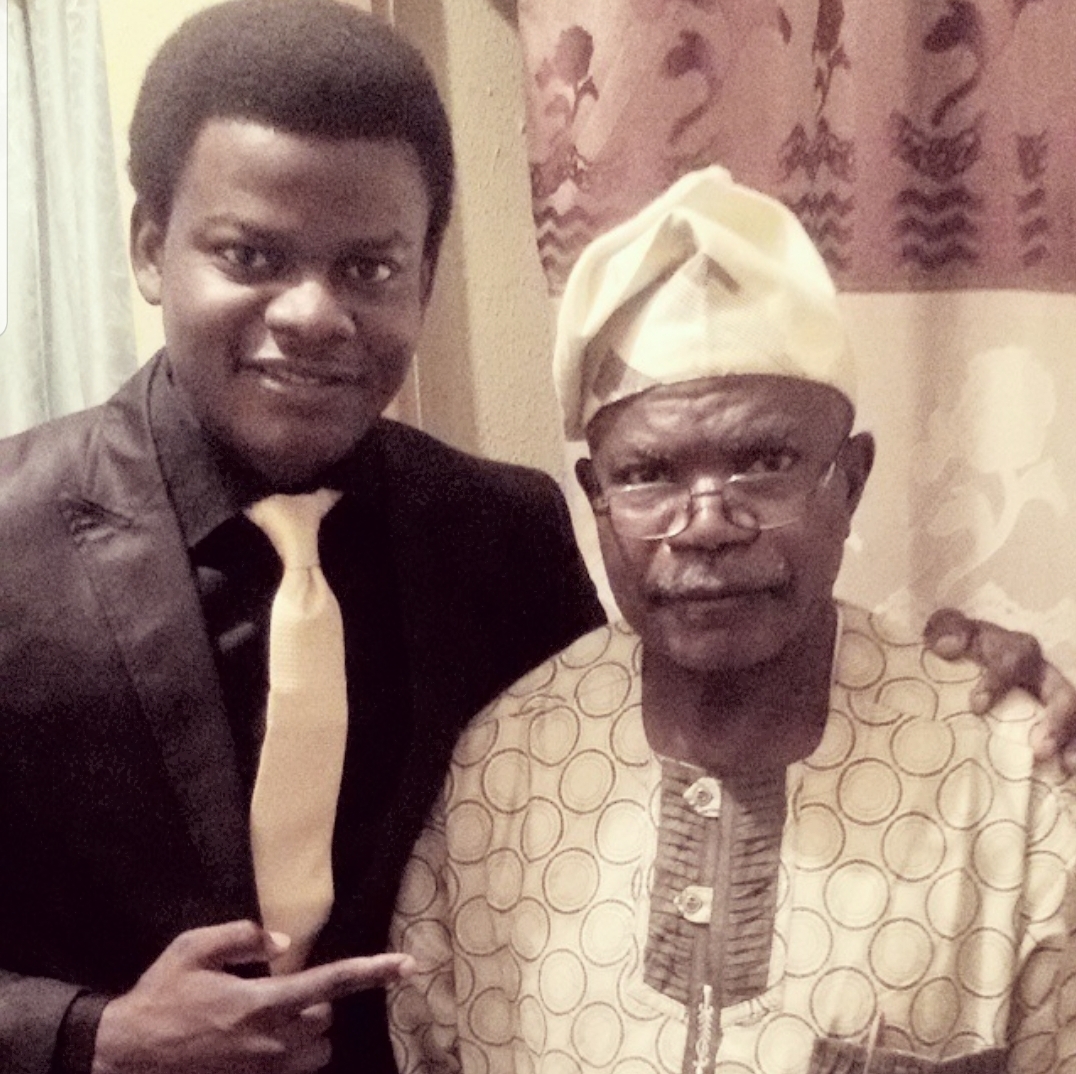 I saw my dad again today. His eyes were closed, as if asleep, and unlike when I last saw him in December, he was sporting a rather fine, grey stubble, like he was trying for a cute grandad look. His brows furrowed like he was grinning or musing about something in his sleep. He looked majestic.

I have some lucid memories from very long ago. Life and the passing of time have not greyed them out, and I know I’m not making them up. There’s one from around when I’d just figured out how to walk. I could only take a few steps at a time before plopping down on all fours again. On one of those days, while I sat on the pavement that linked our balcony onto the sandy streets of Benin, my dad was returning home from an outing. I did the thing — got up on my two feet, walked a few steps, and staggered in his direction, into his waiting arms, as they lifted me off the ground.

That’s probably my earliest memory of him. I still recall the rides, aloft his shoulder, when we crossed makeshift bridges over streams or moved along uneven terrain on the way to the farm on Saturdays. As it turns out, the discography of our shared memories all through my life until he left is all I have now. It’s the only thing that will remain. My dad passed away on February 23rd and I’ve been unmoored on every front.

Nothing really prepares you for the death of a parent or a loved one. As humans, we understand death as a concept, even one not due to natural causes (which I think is an odd term, because nothing about death is remotely natural), so you sort of expect it to happen at some point, hoping that it gets delayed for as long as possible. But you’re never ready.

Watching my father gradually succumb to the illness that eventually took him was a most harrowing mental ordeal. The last throes of pain have coincided with events, over the last couple of months, that would otherwise have filled me — and him, especially — with tremendous joy. Regardless of the occasion, I’ve been unable to deeply enjoy anything since the Fall of 2018 when his health took a downturn. I contemplated therapy at some point but never could will myself to show up for the sessions.

Every time I shut my eyes I see him. I hear his voice as he greets the neighbours before walking in through the front door. He asks for water, and I get him some in his special stainless steel cup on the dining table. He did not like cold water. I still see him nodding off in front of the TV after the evening news, with the volume set too loud. I asked him to turn down the volume sometimes when we spoke on the phone, just so we could hear each other better. I remember showing him how to navigate the functions of his new smartphone. I remember calling him from the Uniben engineering car park to ask for money to buy a recommended textbook as I sneak in my pocket money requests. I recall how he shrieked excitedly on the phone when I notified him that I was getting married (the news about my acquiring a car on the same call didn’t even seem to register in comparison to the marriage one, smh). I remember calling to wish him a happy new year when I got back from church on the times I was away from Benin on January 1. I remember texting him on his birthdays, 1 week after mine. My “Call Dad” calendar entry from 2015 still pops up by 7 pm on Saturdays.

My love for words came from my father. Whenever I hear or read some vocabulary now, I can usually recall the first time I ever encountered them. I can recall where I was and who it was that uttered them. More often than not, it was he. When we were kids, my elder brother and I would plunder his library (something he actively encouraged), as we raced each other to finish novels he had collected from the Sixties. All his paperbacks are still in fine form to this day, with his annotations and the start and finish dates affixed. We’re no strangers to the African Writers Series collection at our home. My father and my mother (who is a teacher, too) were truly the first teachers we had.

He knew a thing or two about consistency and grit, my father. The Osadolo household was up by 5am everyday to have morning devotion. Every day. They lasted one hour and were mini church services in their own rights. I and my brothers learned to read the Bible and learned how to pray in those sessions. By the time we were adolescents, the evening sessions became a regular feature too. He ran the house like a platoon. Dinner was at 7pm, and you were at the reading table till 10pm. Lights out was anywhere from 10:30pm. For my primary and secondary school mates who always wondered why my brothers and I always pulled better grades than the lot, the answer is because my dad ensured we hit the books more than everyone else. Every day. Consistently. My body still rouses by 5am on most days.

He was rather famous for being a straightforward disciplinarian, my father. He didn’t spare the rod back in the day, and we soon learned that we didn’t have the luxury of being foolish in this world. His family, friends, and peers nicknamed him “Opposer” because he was a stickler for doing things right. That’s why our house was always full — his relatives and friends sent their kids to live with us because they trusted him to help raise them right. With a man like my father, you always knew where you stood. He was sure and true.

I think what hurts the most about it all is the feeling that he is going to miss out on a lot of the great things to come; all the benefits that aggregate from having his own children come of age and succeed in the world. He only got a glimpse of it. He won’t be here when my own children are born (thank God he got to spend time with his three granddaughters and grandson), and he won’t be on the hypothetical podium with us on all the days when we win. The quality of our conversations with him greatly improved when I and my brothers transitioned into adulthood, and I am going to miss being able to call him every week to talk about random things.

As time races forward, the pain will be easier to deal with, and his absence won’t loom over everything so much. And maybe I can learn to be deeply joyful about stuff again. Fifty years from today, if I’m ever so lucky to be alive and am able to wield my wits, still, I reckon that a lot of my father’s memories would have greyed out of my mind. Or perhaps they will remain but wouldn’t be accompanied by a deep sense of loss. Because I would be nearer to (meeting) him then than I am now.

Two weeks ago, as I carried Jordan, my one-year-old nephew in Benin, I couldn’t help but see my father in him, as I had some sort of epiphany about the cycle of life. I imagined there’d have been some grand-uncle of mine who’d have rocked my dad in his arms in 1949, while he was a baby. In the 72 years since, he’s grown, made his way in the world, raised a family, made an impact in many lives, and exited the scene. On my way to the airport, my nieces (aged 7, 6, and 4) chorus their desire to follow me to Lagos, and then it clicks in my head: I’m the uncle in Lagos now. My dad’s younger brother was (and still is) the uncle in Lagos for me and my brothers. With time, my nieces and nephews, as well as my own children, will be aunts and uncles themselves. The entire thing throws my mind in an existential spin. The cycle will go on. We’re all fading away, along with our stories. The land underneath us is the only thing that will persist. It will never forget.

What is the measure of a man’s life? What are the things that would have mattered at the end of it? I wrote a short eulogy/biography for my dad for the burial program. The last paragraph reads:

“…[Christopher Aibuedefe Osadolo] was married to his lovely wife, Mrs. Veronica Osadolo, and together they raised four children. He led a good life. He had the trust of all who knew him, was loved by his friends, and worked hard to provide for his family and all dependent on him. He had a large heart and was always open to help others as much as he could. His death is heaven’s gain. He will be missed.”

My father loved and cared for his family. He was trustworthy, generous, and hard-working. He served and believed in Jesus Christ, with Whom he’ll remain until the end of time.