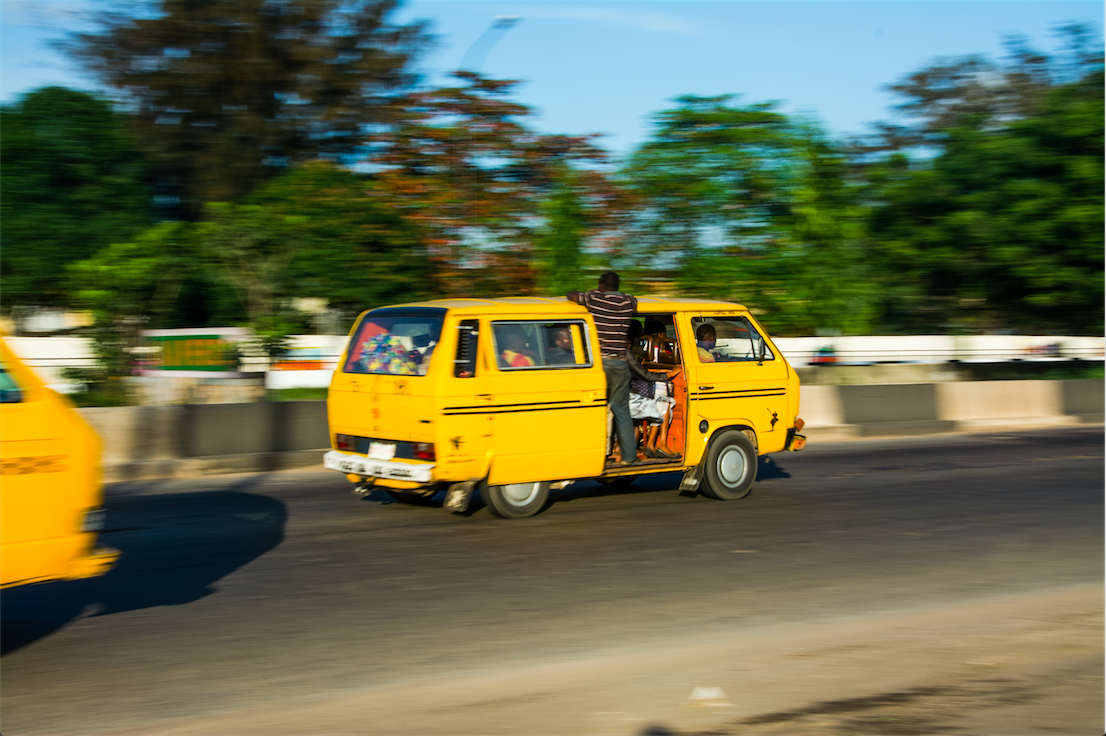 That’s an average of 25 bus rides every week for 40 weeks. At a daily cumulative average time of 3 hours spent on these rides, I’ve accrued about 840 hours in transit across 1000 bus rides. (The occasional Uber ride and cab rides are unaccounted for here).

It’s an incredible amount of time to spend on the move. That’s 35 days – or a month and a week – mostly spent looking out the window of a moving car in Lagos, staring intensely at nothing in particular.

I started a new gig in Lekki this year (more of that in another post I hope I have the good sense to finish) and joined the horde of people shuttling between the Island and Mainland for work. Nearly every activity that takes me out of my house every day happens on the Island, and it’s quite ridiculous how I’ve managed to convince myself that remaining in Yaba is still a better option for me, financially. Seeing as all I come to do at home nowadays is sleep at night, I’ve started to think that my rent is a rather steep price to pay for a bed to lie on at the end of the day.

Moving around in Lagos is a nerve-wracking ordeal. You’ll find soon enough that you’re constantly racing against time. Lagos traffic is a time-bending force of nature all by itself. You could ply the same route and achieve astonishingly different ETAs each time. A route that takes 25 minutes today could balloon to a 97-minute trip on the return leg.

You know how there’s always a “study” coming out that tries to chronicle all the cool, fixer upper things you could be doing while you’re in traffic? Well, they didn’t factor in Lagos in those studies, apparently. You can’t be taking an online course while trying not to die, Sam. Plus, the network signal on Third Mainland Bridge keeps gesticulating that you couldn’t possibly be thinking of such things.

Depending on your mood, looking out the window in the morning isn’t half bad. Granted, it eerily feels like being in a moving cell and peering directly out into other people in other moving cells and farther onto gen pop. Except, on Third Mainland Bridge, gen pop is mostly filled with scantily clad men, 20 feet below, squatting and taking a shit in the black river, along with their comrades, perched on wooden rafts docked 35 yards away from their homes. The whole act seems very pedestrian, nothing to make a big deal out of, much like a bunch of guys in a dorm shower brushing their teeth and discussing the games from the evening before. It’s only a big deal to the glaring eyes from above, eyes which the men promptly ignore or pretend aren’t there.

The sights are better at night, obviously. Peering into lit office spaces and apartments as they trudge past my point of view creates diverse, fleeting scenarios in my head. I think of the company culture of the folks in that lit office on the 8th floor of the Civic Towers,  and wonder if the guys still at their desks are staying the night. Maybe they stayed back to complete their torrent downloads before heading home. Maybe they’re waiting out the traffic.

Riding the bus is a deeply immersive experience. Violently so. You can only pretend to ignore everyone else for so long until something dramatic occurs – and it usually does. Something as innocuous as checking your notifications and responding to messages can devolve into the guy sitting next to and behind you telepathically joining the conversation you’re having on a private chat. Under the gaze of passengers turning the pages with me with their eyes fixed on my phone screen, I’ve read copious amounts of Alain de Botton, Noah Harari, and Teju Cole in transit this year.

You can only ride in these steel cages for so long until they start to take a toll on your body. Before this year, I only grossed 100+ minutes in a moving vehicle in one day only when I was traveling between States. And that happens maybe 3 times a year, at the most. I was always weary after each trip and wary of the next one. Because my body always took a hit. Now I gross about 180 minutes nearly every day. Sometimes more. Let’s just say my body isn’t too psyched.

Another year has passed in which I didn’t improve on my Yoruba. Even though nearly every conversation that happens in buses is in Yoruba, I’ve managed to blend in well into things without really learning the language. But my understanding (response-ability, more like) has broadened significantly since. I get it now when people tell me it’s about the easiest language to learn (I don’t agree, I don’t know). But Yoruba is a gesture-heavy language, speakers gesticulate so much while making a point that it’s basically loose sign language with the audio turned on. I’ve gotten better at reading the signs and matching patterns to get by without really knowing the language.

Riding the Lagos bus is more than a means of getting around for me now. It’s a cultural experience all on its own. Every bus on the road across the city, with the attendant anyhowness that marks its pulsating voyage, is a metaphor for the charges, firing and traveling in indiscriminate bursts across the city’s meshy neural network.

There’s the occasional Uber – my personal favorite for when I’m out later than 9 pm. Apart from creating the occasional comfort and being driven around in complete silence that I seldom crave, it has proven to be an efficient means of getting home without the risk of getting mugged. I had the misfortune of breaking my MO once and took a bus on a humid Wednesday night in July from Lekki at past 10 pm. It was the most dramatic ordeal I’ve had the opportunity to be a part of on the road. Long story short, we were robbed by men dressed in police combat gear, relieved of our phones and bags (I dunno how, but I miraculously walked away with my backpack containing my Mac that night). I’ve strictly adhered to my MO since. No buses at night.

Jetpacks. I’d be remiss if I didn’t mention my obsession with jetpacks this year. You spend so much time commuting, a few wonky ideas start to flood your mind. There hasn’t been a day I was on the road this year I didn’t crave jetpacks. I genuinely think they’ll help cut down commute times significantly across the city. Or we could have civilian Iron Man suits. Someone should build a business around those. Or, maybe there should be a legislation that mandates companies to offer some form of remote options to their employees (Techpoint wrote an article about this ).

One gets to leave the city behind sometimes. Sometimes for work, or when one takes a break from work. I don’t understand people who stay back here when they take a vacation from work, though. The city will always be here, the smell and the madness won’t go away. You’re meant to be here only if you absolutely have to be. One is besotted with thoughts of leaving every now and again when you can no longer muster up sufficient patience and tolerance for the bus life, when your bones ache more than normal.  When you need to rest your mind. But one promptly returns – unwillingly, but without as much a fight as is needed – to the yellow mobile cells. It is the identity of Lagos. It is also, in a weird way, my identity. I am riding the bus and finding myself.